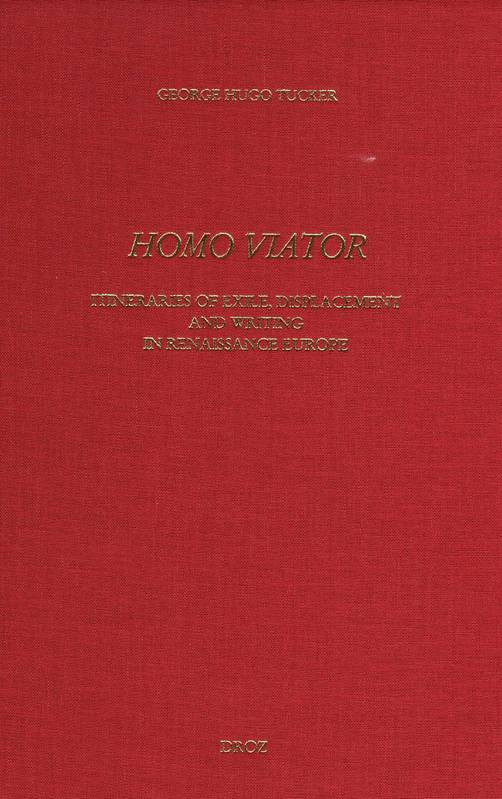 In the Renaissance exile writing is not limited to the Ovidian elegiac
discourse of exile, whether the exile in question be political or religious,
fictional, or intellectual. Linked to a broader tradition of reflection
(Stoic, Platonic, Christian or Jewish) upon exile, such writing is sometimes
indistinguishable from the philosophical or religious discourse of the theme
of homo viator, whilst overlapping with the scientific, historical or
fictional discourses of travel. It also encompasses a variety of literary or
para-literary forms: travel (or pilgrimage) accounts; allegories, or
allegorical commentaries; philosophical or satirical dialogues; lyric or
didactic poetry. Falling into three parts (I. “Travel, Writing, Identity &
Exile”, II. “Homo Viator”, III. “Homo Viator: Homo Scribens”), this original,
erudite study first proposes (I.) a typology of exile, based on the writings
of Petrarch, Marot and Joannes Sambucus (Zsámboky) (plus Horace, Dante,
Rabelais, Du Bellay and Montaigne) and on the notion of libertas exilii, then
(II.) examines the allegorical tradition of the “Journey of Life” (culminating
in the ekphrastic Tabula Cebetis), and finally (III.), in the light of these,
presents the exiliar writings of Petrus Alcyonius (the author of a dialogue on
exile), two Portuguese Marranos, Diogo Pires and Amatus Lusitanus, and Joachim
Du Bellay, crowned by those of the parallel intellectual exiles of the
traveller Pierre Belon and of the satirist Ortensio Landi.