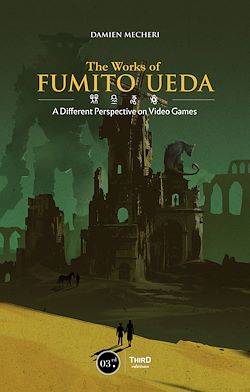 The Works of Fumito Ueda

The Works of Fumito Ueda

A Different Perspective on Video Games

Go behind the scenes of the creation of the Fumito Ueda trilogy !
Fumito Ueda has worked on 3 games: ICO, Shadow of the Colossus and The Last Guardian. Each of them was able to express the depth of their author's reflection, his love of purity and showed a real poetry.
Are video games art ? This study of the Futimo Ueda's work focuses on the question of the artistic essence of video games.
EXTRACT
When the game ICO was released in 2001, it had several decades' worth of video games behind it. The game itself was significantly influenced by video games that had touched its creator, Fumito Ueda: Another World by Éric Chahi and Prince of Persia by Jordan Mechner. Yet, when a player takes the ethereal Yorda's hand, when they feel this physical contact through the vibrations in the controller, something happens. Something new and profound. Something that can only exist through a video game. A simple idea, attached to the R1 button, and digital interaction opens a new door. Of course, this insignificant-seeming gesture is but a small representation of what can really happen. Its strength lies elsewhere; it draws from everything that makes up ICO: its art direction (everything in chiaroscuro), its vanishing lines, its simple and clear game mechanics, its lack of visual interface, its quest for physical realism, its minimalist narration, its extraordinary sensibilities. It is an opening to an evocative otherworld that lets our imagination soar. Contemplative, slow and nearly speechless, ICO offers an uncommon, poetic adventure, rejecting traditional video game standards while still drawing from them. Many remained indifferent to it. Just as many were touched as rarely before.
ABOUT THE AUTHOR
Passionate about films and video games, Damien Mecheri joined the writing team of Gameplay RPG magazine in 2004 and wrote several articles for the second special edition on the Final Fantasy saga. With this same team, Damien continued his work in 2006 for another publication known as Background, before continuing the adventure online in 2008, with Gameweb.fr. Since 2011, he has written and co-written numerous works for Third Éditions, including The Legend of Final Fantasy X, Dark Souls: Beyond the Grave and Welcome to Silent Hill: Journey to the Center of Hell and actively participates in the “Level Up” and “Video Game Almanac” collections from the same publisher.
S'identifier pour envoyer des commentaires.