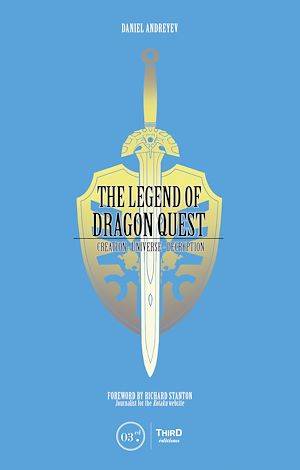 The Legend of Dragon Quest

The Legend of Dragon Quest

**Discover all the secrets and mechanics of the famous Japanese video game
Dragon Quest !**

This book looks back at the entire Dragon Quest saga, tells the story of the
series' birth, retraces its history and deciphers its mechanics.

**In this book, the author shares us all his expertise and his passion in
Japanese gaming to decipher the creation and the story of this saga and his
creator, Yuji Horii.**

Even with only limited knowledge of Japanese and somewhat difficult technical
conditions, the story was very well told. This was perhaps what surprised
players most. Dragon Quest V is a large family cycle of emotions, as
transparent as an epic tale by Alexandre Dumas, the author of famous works
such as The Three Musketeers. In the end, I was lucky that my first taste of
the series was this excellent episode, since VI was far more extravagant, with
its tales of parallel universes and heroes traveling on flying beds. A
slightly puzzling game, but not without levity nor offbeat humor. One of the
most emotional moments of Dragon Quest V is when we end up going back in time
to change the past, thus saving the future. The time travel theme has been so
often used in science fiction, particularly during the 1980s, that it should
have left me impassive. It was not even the first time I had experienced it in
a video game. But this adventure, with its simple graphics and persistent
melodies, glanced lightly upon feelings that leave no one unmoved. “What would
I have done differently if I could have changed things” is a very common
concept used in fiction, from A Distant Neighborhood by Jirô Taniguchi to the
Quantum Leap series. Well-told, it is so simple and so effective that it
affects each and every one of us.

**Daniel Andreyev** is an author and journalist of Russian origin. His career
in video game journalism began twenty years ago, during the golden years of
video gaming, with _Player One, Consoles +_ and _Animeland_ , with a
particular interest in Japan. Having spent some time on translation, he is now
part of the New Games Journalism movement, which places the player at the
heart of the video game experience. He produces the _After Hate_ and _Super
Ciné Battle_ podcasts. He also trades memories with his friends in Gaijin
Dash, the Gamekult show on Japanese video games. He is a fan of far too many
things to list them all here. But when he is not writing, not watching a
movie, not reading comics and graphic novels, not climbing mountains or
exploring ruined buildings, he might be cooking, exercising or dreaming of one
day owning a dog.
S'identifier pour envoyer des commentaires.