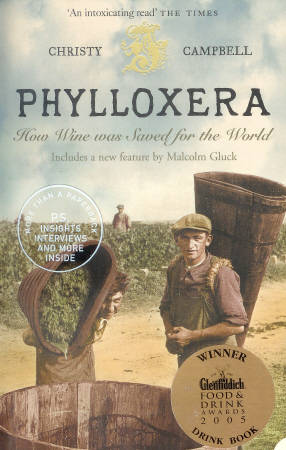 Phylloxera, how wine was saved for the world

Phylloxera, how wine was saved for the world

Cliquez ici pour le commander
by Christy Campbell
A historical investigation into the mysterious bug that wiped out the vineyards of Europe in the 1860s – and how one young botanist, eventually ‘saved wine for the world'. The story's hero was a young French botanist called Jules-Emile Planchon, who had served an apprenticeship at Kew Gardens under the great Sir William Hooker. It was he who eventually identified the culprit – Phylloxera - after a fact–finding mission to America and who provided a solution: grafting Phylloxera-free American vines onto European root-stock. To this day the French don't like to admit that by 1914, all vines cultivated in France were hybrid Americans.
Christy Campbell is a writer, journalist and former defence correspondent and feature writer for the Sunday Telegraph, which he joined on the eve of the Gulf War.
ED : Harper Perennial (2004), 12x19 cm, 315 pages, broché.
S'identifier pour envoyer des commentaires.