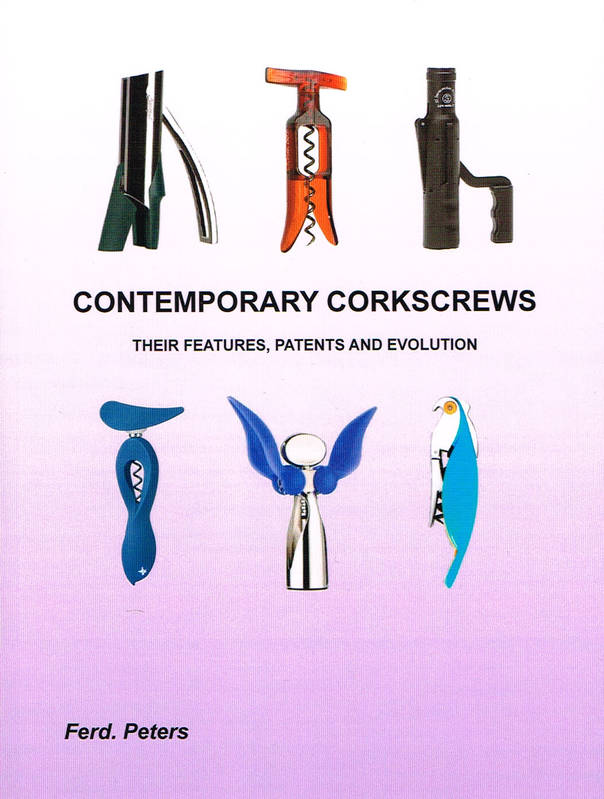 Their features, patents and evolution

Foreword by Bert Giulian
Ferd Peters is well known in the world of corkscrew collectors. He is passionate, informed, and disciplined and has established himseif as an authority by writing an extremely intluential book, his magnum opus, Mechanical Corkscrews. Subsequent respected books on Pocket Corkscrews, German Corkscrew Patents, and German Corkscrews Registrations followed. His knowledge and thoughtful opinions are sought and highly regarded. Ferd has the energy, concentration, and patience to seek the information, sometimes tediously found after many hours of searching, and to organize and compile a meaningful publication.
Now, after thirty years of studying antique corkscrews, this new book represents a departure. This time, he has applied his knowledge and expenence to the subject of Contemporary Corkscrews. In the process of updating patents and registrations, he has found a rich assortment of charming and ciever designs. Modem materials that were not previously available even twenty years ago are now used to create ingenious and efficient corkscrews. Ferd has documented the numerous imaginative variations, small differences, and combinations.
Along the way, he has discovered surprising trends. Even with the explosion of technology, Ferd Peters has made us aware that there are now fewer corkscrew types manufactured than in the nineteenth century. This decreased diversity has led to his realization that there now really exist only three basic, general types: SeIf Pullers (Screwpull), Single Levers (waiters), and Double Levers. The reasons for this transition are discussed in detail.
S'identifier pour envoyer des commentaires.